How To Conquer Your Fears (For A Little While, At Least)

If you talk to any designer worth their salt, they’ll tell you that design critiques - wherein one reveals their work to unfamiliar eyes in order to put its effectiveness to the test - are vitally important to the design process. I would bet that those same designers would also agree that critiques, while necessary, are still absolutely terrifying. Exposing any creative work to criticism is an act of vulnerability, and being vulnerable is always at least a little bit uncomfortable.

Some of my most vivid memories from design school are of the 24-to-48 hour period preceding a critique, especially the ones conducted by designers working out there in what our professors called “the real world”. Laying my brain out on the table was scary enough when the person inspecting it was someone whose only interest is ensuring they can mold it into the brain of a good designer. The thought of doing that for someone I didn’t know, someone good enough to be working out there in the “real world”, was downright paralyzing.

Somehow, though, I managed to get through them. I also managed to get my degree and make a go of it as a designer in “the real world”, persevering through moments of vulnerability that nearly make me wistful for those portfolio reviews from my college years. So when I was invited by one of my old professors to be one of those working designers reviewing student portfolios at my alma mater, I jumped at the chance. To be able to give something back to a place instrumental in shaping who I am today was incredibly exciting for me.

This eagerness persisted until right about the moment I found myself trudging through familiar snow-covered paths on my way to UMASS-Dartmouth’s College of Visual and Performing Arts, and was quickly replaced by a terror that seemed simultaneously familiar and alien. Instead of being critiqued, I was the one who was critiquing - whose terrible idea was this? Why should these people listen to me? Do I really have any idea what I’m talking about? The Lovecraftian horror in my heart was only compounded when I met the class who would be subjected to my criticism - students a class away from a much-needed winter break, each one of them with a haunted look in their eyes that spoke of sleepless nights and X-Acto blade wounds. 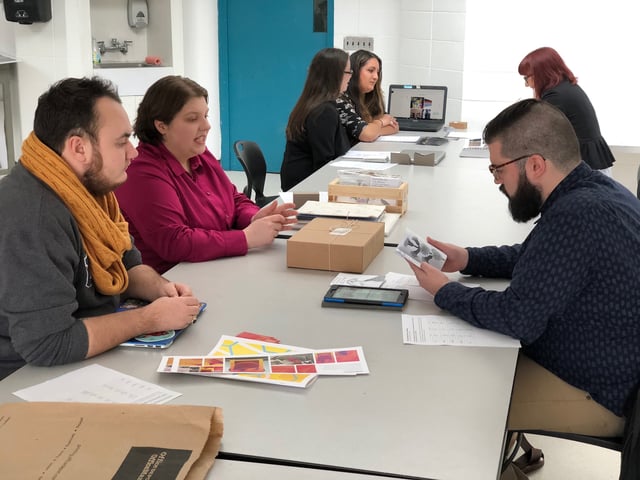 It took every fiber of my being to stop myself from sprinting out the door as fast as my legs could take me. But as I poured over each student’s portfolio, I found that I had answers for their questions and advice for their futures, and the passion in their voices invigorated me. Soon enough the anxiety I felt walking up those frozen concrete stairs seemed silly - if I had indeed run out of the room, I would have left behind an opportunity to help others grow as designers, as well as leaving behind some learning and growing for myself.

I would be lying if I told you that I’ll walk into my next review or presentation with no fear in sight - ultimately, the feeling of vulnerability will probably never go away, because revealing anything you’ve poured your heart into will always be scary. To conquer fear is not to erase it from existence - it is fighting through it tooth and nail with the confidence that something better lies in wait for you on the other side.  At the end of the day, fear is temporary, but regret is forever - true growth doesn’t happen unless you’re uncomfortable, as uncomfortable as that sounds.

Topics: From the Experts, Authentically Us, Our People, Featured